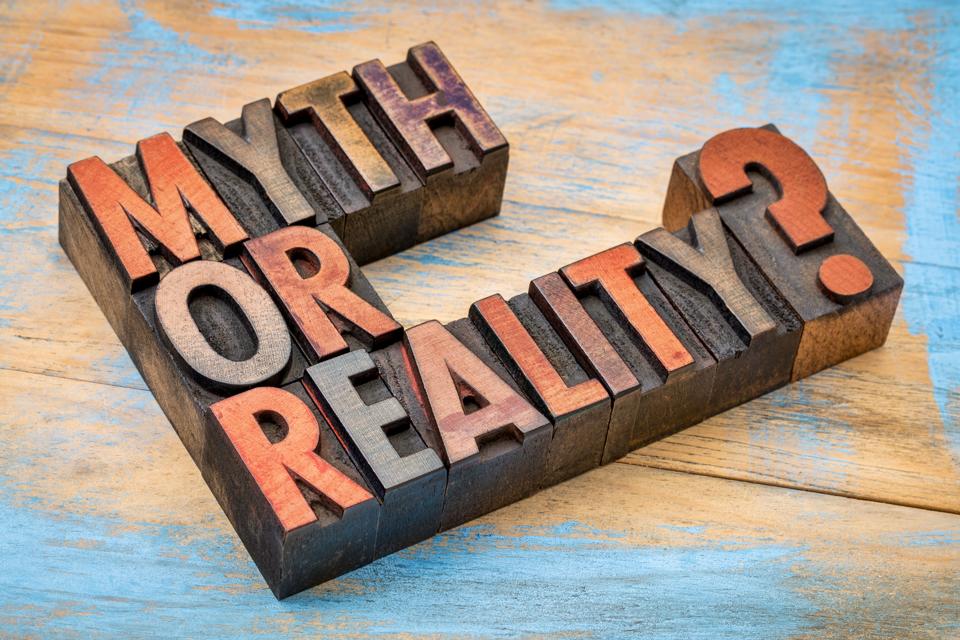 There are many misconceptions and myths about student loan forgiveness. GETTY
President Biden Will Forgive All Student Loans

This myth asserts that President Biden will forgive all student loans.

Due to the cost, Congress is likely to limit the forgiveness in various ways, such as limiting it to borrowers who are experiencing economic distress, borrowers who owe less than $10,000 and borrowers who earn less than $125,000.
The President Can Forgive All Student Loans

This myth claims that the President can forgive all student loans through executive order.

A few policymakers have stated that the President (actually, the Secretary of Education) has the legal authority to forgive all student loans.
MORE FOR YOU

Biden Comes Out Against $50,000 In Student Loan Forgiveness - But Supports This Amount, Instead

This false assertion is based on a misreading of the waiver authority in the Higher Education Act of 1965 [20 USC 1082(a)(6)], taken out of context. The waiver authority, which applies only to loans made under the Federal Family Education Loan (FFEL) and Federal Perkins Loan programs, is limited to operating within the scope of the statute. Specifically, when Congress authorizes a loan forgiveness program, such as Public Service Loan Forgiveness, Teacher Loan Forgiveness or the Total and Permanent Disability Discharge, the U.S. Department of Education has the authority to forgive student loans as authorized under the terms of these loan forgiveness programs.

Only Congress has the power of the purse. The executive branch cannot spend money that has not been appropriated by Congress. Congress can pass legislation to forgive student loans, but without this legislation, the President does not have the legal authority to issue blanket student loan forgiveness.

The waiver authority also does not apply to private student loans.
The Legal Authority for the Payment Pause and Interest Waiver Can Be Used to Forgive Student Loans

Some people claim that President Trump used the waiver authority to implement the payment pause and interest waiver, setting a precedent that could be used to forgive student loans.

President Trump did not identify the legal authority used to implement the payment pause and interest waiver in his executive memo, but there are three possibilities that do not rely on a misreading of the general waiver authority.


The statutory definition of the economic hardship deferment provides the Secretary of Education with the authority to create other eligibility criteria for the economic hardship deferment. [20 USC 1085(o)(1)(B)]
The regulations for the Direct Loan program allow the Secretary of Education to provide administrative forbearance “due to a national military mobilization or other local or national emergency.” [34 CFR 685.205(b)(8)]
The Heroes Act of 2003 authorizes the Secretary of Education to ensure that “recipients of student financial assistance under Title IV of the Act who are affected individuals are not placed in a worse position financially in relation to that financial assistance because of their status as affected individuals” in connection with a war or other military operation or national emergency. Affected individuals include individuals who “suffered direct economic hardship as a direct result of a war or other military operation or national emergency.” [20 USC 1098bb(a)(2)(A)]

This myth claims that “student debt cancellation can … give a boost to our struggling economy through a consumer-driven economic stimulus that can result in greater home-buying rates and housing stability.”

Forgiving student loan debt yields an annual financial impact that is about 6% of the amount forgiven, corresponding to the amount borrowers are actually paying on their student loans.

Student loan payments total about $100 billion a year, approximately 0.4% of GDP. (For comparison, the cost of the payment pause and interest waiver is about $60 billion a year.) Forgiving all student loan debt will yield a smaller positive impact on the economy in the short term than other stimulus efforts.

Student loan forgiveness will also not have a big impact on home-buying rates.

Based on data from 2017 follow-up to the 2016 Baccalaureate and Beyond longitudinal study (B&B:16/17), the average student loan payment among Bachelor’s degree recipients is $306, compared with an average car payment of $392 and an average mortgage payment of $1,254. The average rent payment for borrowers who don’t own homes is $875, yielding a difference of $379, which is greater than the average student loan payment.
Student Loan Forgiveness Will Provide Immediate Financial Relief

This myth claims that student loan forgiveness will provide immediate financial relief to millions of student loan borrowers who are experiencing economic distress because of the pandemic and recession.

Forgiving less than the full amount owed might not yield much of an immediate impact because it will change the remaining time in repayment but not the monthly payment amount. This is especially true of borrowers in income-driven repayment plans, where the loan payments are based on the borrowers’ income and not the amount they owe. Even with $50,000 in student loan forgiveness, more than 40% of borrowers in income-driven repayment plans will still owe some student loan debt.

The payment pause and interest waiver, on the other hand, provides immediate financial relief.
Student Loan Forgiveness Will Solve the Student Loan Problem

There really isn’t a student loan problem, so much as a college completion problem. Students who drop out of college are four times more likely to default on their federal student loans than borrowers who graduate, and represent more than two-thirds of the defaults. Borrowers who drop out of college have the debt, but not the degree that can help them repay the debt.

This myth claims that student loan forgiveness is the best way to address racial disparities in student loan debt.

Students who attend Historically Black Colleges and Universities (HBCUs) are twice as likely to borrow to pay for college. They also graduate with 25% more student loan debt. Their student loan payments represent a greater share of income.

But, forgiving $50,000 in student loan debt per borrower is not the most effective way of closing the racial debt gap. Only 18% of the financial benefit from blanket student loan forgiveness will go to Black or African-American borrowers. Instead, why not just forgive the student loan debt of all borrowers who attended HBCUs? This student loan debt was caused, in part, by chronic underfunding of these institutions. The cost of this forgiveness is about $30 billion.
The Federal Government Can’t Forgive Private Student Loans

So, Congress could pass a law to forgive private student loans by appropriating funds to pay off the loan balances.

This would cause losses for the lenders and investors in student loan securitizations, since they would not receive the future interest revenue they were expecting, just par value for the loans.

Lenders might respond by no longer offering private student loans or by charging higher interest rates.
All Student Loan Forgiveness Is Tax-Free

This myth claims that all student loan forgiveness is tax-free.

Some student loan forgiveness is tax-free and some is taxable.

Employer-paid student loan repayment assistance programs, or LRAPs, are also tax-free through the end of 2025.

Otherwise, the cancellation of debt is treated like taxable income to the borrower under current law. It is as though someone provided the borrower with income to pay off the debt. Thus, the forgiveness after 20 or 25 years in an income-driven repayment plan is taxable.

The IRS will forgive tax debts when the taxpayer is insolvent (total debt exceeds total assets). A borrower who has been in an income-driven repayment plan for two decades is likely to be insolvent. But, there are no guarantees that the tax debt will be forgiven.
Student Loans Can Be Discharged in Bankruptcy

This myth asserts that student loan forgiveness is not necessary because student loans can be discharged in bankruptcy.

There is an exception to bankruptcy discharge of student loans unless the debt imposes an “undue hardship” on the borrower and the borrower’s dependents. This is a very harsh standard, requiring a current and future inability to repay the debt while maintaining a minimal standard of living. One bankruptcy court judge referred to it as requiring “a certainty of hopelessness.”

Certain other types of student loans, such as bar study loans and residency/relocation loans, can also be discharged because they are not considered to be qualified education loans.
The Federal Government Has Never Previously Forgiven Student Loans

This myth asserts that the federal government generally does not forgive student loans.

This myth asserts that student loan forgiveness creates a risk of moral hazard.

Moral hazard occurs when a student borrows to the limit because they expect their student loans to be forgiven.

Most student loan forgiveness programs cap the amount of forgiveness per borrower, thereby limiting the potential for moral hazard.

This myth claims that borrowers are eligible for Obama Student Loan Forgiveness after paying down 10% of their student loan debt or satisfying other easy criteria.

Public Service Loan Forgiveness was created by the College Cost Reduction and Access Act of 2007, during the Bush Administration, not the Obama Administration. The loan forgiveness program became effective on October 1, 2007, before President Obama took office. This law also created income-based repayment, which became available starting on July 1, 2009. Neither of these programs were ever called Obama Student Loan Forgiveness.


I am Publisher of PrivateStudentLoans.guru, a free web site about borrowing to pay for college. I am an expert on student financial aid, the FAFSA, scholarships, 529…